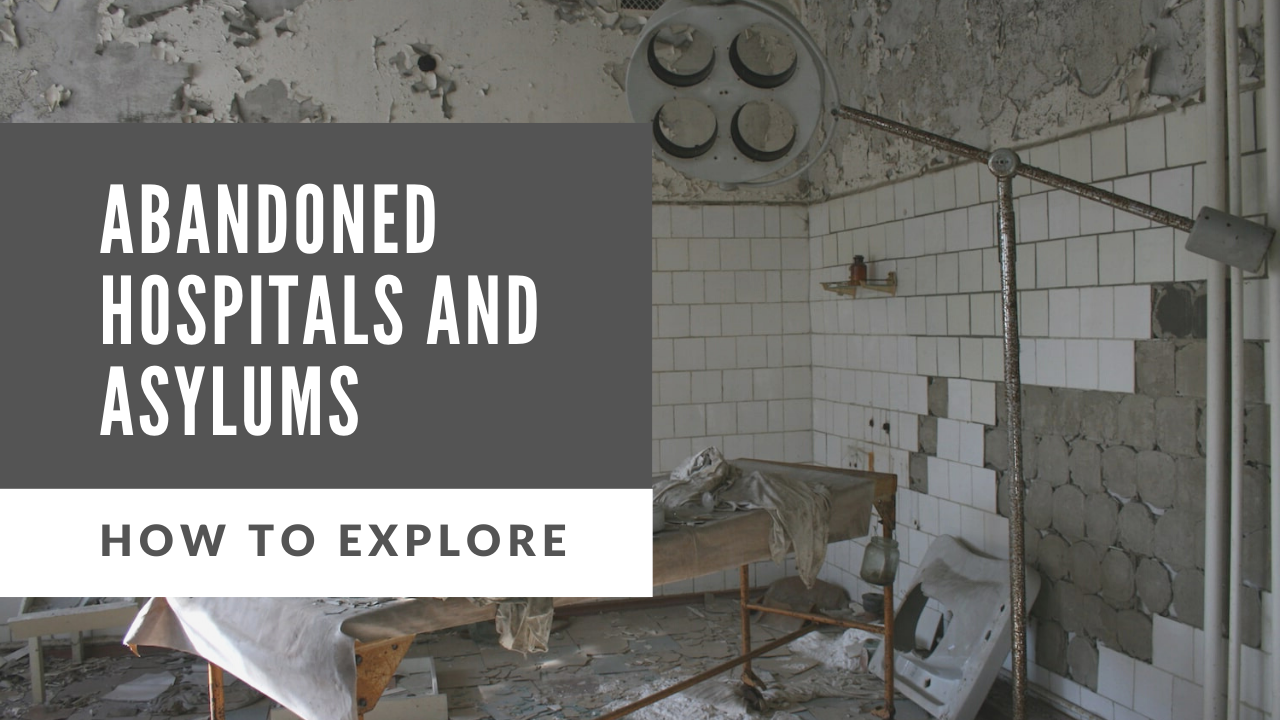 Abandoned hospitals and abandoned asylums are inviting and interesting targets of exploration for the urban explorer. These structures are often older, sometimes historic, and can be quite intimidating in their presentation and architecture. We’ve all seen Shutter Island. Most of us are familiar with the Kirkbride Plan.

The typical urbex adventurer is a storyteller. They are an artist looking to fill in the blanks of what happened between when the building they are investigating was a thriving facility and how it sits now, empty and abandoned. Much like abandoned churches, abandoned hospitals and abandoned asylums are particularly alluring destinations because of this shadowy history.

This embedded niche of decrepit abandoned hospitals and abandoned asylums is a natural environment for ghost stories or haunting tales. There are countless horror films and slasher flicks that take place in old abandoned hospitals. Typically, there is a good reason for this.

They are physically creepy, dark, and eerie, and almost always carry exceptional emotional baggage. When you consider all the harrowing tales of life and death that took place within those old walls and along those darkened corridors, perspective comes through the cobwebs.

As is often the case, abandoned hospitals and mental asylums are older buildings, erected around the turn of the last century. They can be found clustered heavily in the Northeast and Midwest United States and in New England.

These older buildings were built before the ergonomics and efficiencies of modern technology were incorporated into the designs of hospitals. Within these odd but well-planned floor plans, there are unusual nooks and crannies, voids, empty spaces, and other curiosities an urban explorer wouldn’t find in a more modern facility.

Old buildings have a bevy of reasons as to why they were left behind. Abandoned hospitals and mental institutions add their own special reasons to the list of justifications on their status of abandonment.

The usual reasons often include foreclosures or poor investments, new developments, and high costs of demolition and deconstruction. Some businesses are shuttered as the city they are located in shifts their focus to other manufacturing or industries. But every community needs a hospital. So, why are so many hospitals abandoned?

Why Are These Hospitals and Asylums Abandoned?

A large portion of why hospitals and asylums are abandoned is simply through the change in the medical system and the continual improvement in how we treat our sick, injured, and dying. As buildings age, they offer fewer opportunities for those operating within their walls to make the necessary changes required to keep up with the times.

Obsolescence in a warehouse can be converted to just about anything else. However, hospitals are a specific structure and offer few to no chances for an incoming tenant to restructure to fit their needs. So these obsolete hospitals sit abandoned, waiting for a new buyer that never comes to either convert or raze the structure.

Going obsolete isn’t always a bad thing. Consider tuberculosis sanatoriums. They went out of business and became abandoned when we discovered a way to cure TB. Any good doctor would rather see healthy patients and fewer asylums.

And as we began to understand how to treat mental health issues, and changed our focus from isolating to therapy, more and more mental asylums are emptying out and going abandoned.

War hospitals erected in a time of crisis are often left behind when the cataclysm is over. Disasters such as Chernobyl, Hurricane Katrina, and Fukushima created notoriously popular abandoned hospitals.

But sadly, one of the most common reasons for the ominous abandoned hospital building is bad human behavior on the part of the administrators. One such example of this is Georgia’s Bad Debt Hospital, which we cover in-depth here.

Once these facilities are abandoned, why are they left standing in place for so long? The ghost story of the “old abandoned hospital” is one many of us are familiar with because there are so many left standing. Some of these buildings have intricate architecture and are revered monuments of the community even if they are no longer in use.

Some city planner has the building on their files labeled as “future use” or “to be razed”. But after it becomes apparent no one will occupy the old structure, no one wants to pull the trigger on knocking them down. In many cases, they are often gorgeous structures that we continually hope will be put back into use. This is why, in many cases, extensive fencing and “No Trespassing” signs are commonplace.

Because of zoning and historical districts, it may be difficult to schedule these old abandoned hospitals for demolition. Built in the late 1800s or early 1900s, these historical buildings sit abandoned and aging as committees argue about what to do with them.

Sometimes, the discussion is not always about the historical significance of the structure, but the age in which it was built offering difficulties in its destruction. These complications only add to the time spent sitting empty, and are a benefit to the urbex community.

Another reason these abandoned hospitals and abandoned asylums can sit empty for so long is that they have an on-property cemetery. Graveyards and memorial statuary are protected under various regulations and red tape. This may hold up the city in enough red tape that they shelve the entire process. As a result, they let the abandoned hospital rot where it stands.

Again, this is a benefit for urban explorers. However, it is important to always keep in mind the sanctity and integrity of any hallowed ground such as a cemetery. While it may be abandoned and forgotten, it is in the best interest of our community to respect these locations. The goal is to not be lumped in with the casual vandal.

Dangers For Urban Explorers in Abandoned Hospitals and Asylums

Old structures always include new levels of exploration complications. Abandoned hospitals top the list. The age of the buildings often means they will have asbestos-protected pipes. These pipes will be in some array of decomposition, so there is almost assuredly going to be asbestos dust in the air. As a result, it’s important to wear a respirator for the safety of your lungs.

The peeling paint coming off in ribbons and strips from the walls and ceilings may be lead paint depending on how long ago the hospital was abandoned, and the last time it was painted. As these paint chips crumble into dust, you’re breathing in that lead.

Old buildings also may have locations that were workplace hazards that would never exist in today’s modern buildings. Many of these abandoned hospitals were erected before regulators such as OSHA existed and could have ancient hazards that you would never suspect.

Old mechanical rooms are full of heavy machinery on rusted supports or other unforeseen dangers that pose a risk to those of us peering into these windows of the past. Long story short, be careful.

Aside from the age of the structure, rusting metal, rotten wood, and collapsing floors, urbex adventurers need to keep additional hospital-specific hazards in mind. As these abandoned hospitals and asylums fall into disarray, the already unsanitary conditions dissolve rapidly into a rather unpleasant environment.

If the hospital had an incinerator, there is likely going to be a large hazard in exploring it. With self-locking doors, rusted hinges, and the fact that it was never designed for isolated exploration, it is possible to find yourself locked in an inescapable structure that could require you to call for outside assistance. Also, the existence of bio-hazardous material is more likely in an abandoned hospital.

Some facilities have been found with jars containing specimens and parts for further examination being left behind. We have all seen the jarring (see what I did there) photos. There is no telling what you may come across in these old abandoned hospitals, so keep your sanity and explore safely.