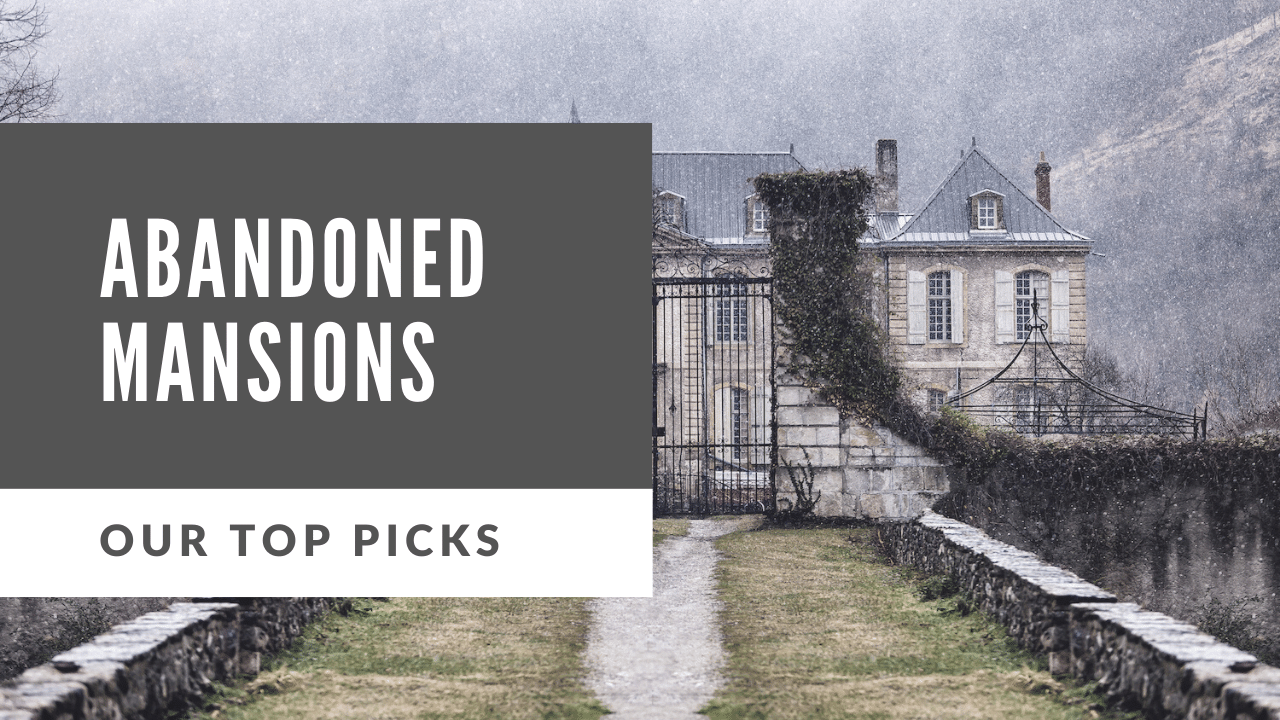 While urban exploration often takes participants into long-forgotten factories, vacant warehouses and empty hospitals and schools, wandering through abandoned mansions is a uniquely unforgettable experience. The contrast between their former grandeur and current disrepair can be striking, and furniture and other artifacts left behind by the people who once lived there create the sense that their spirits still linger in the rooms.

Looking for more exploration guides? Check out Exploring 10 Amazing Abandoned Amusement Parks in The U.S. and The Best Urban Exploration Locations In The US: Top 7 Cities.

The Best Abandoned Mansions Around

If your urbex bucket list includes visiting some of the most incredible abandoned mansions in the world, keep reading to learn about 10 you won’t want to miss.

In the midst of the Hudson River, a once-grand mansion sits on small chunk of land known as Pollepel Island. The island was purchased by Francis Bannerman VI in 1900 to store the military surplus goods on which his family had built its wealth in the decades following the Civil War.

His first warehouse was merely a plain concrete building, but to attract attention (and new business), he decided to build his second warehouse as a replica of a Scottish castle in tribute to his family’s heritage. Remarkably, Bannerman designed the castle himself in sketches on scrap paper, and the building went up successfully without any input from architects, engineers or blueprints. He put up a small residence nearby, which he and his wife Helen used as a summer home, later adding lush gardens with paths and terraces.

Francis died in 1918, and the business began a corresponding decline after a storm decimated the island along with the ferry used to bring visitors in from New York City. The castle remained vacant and unused until 1967, when the state of New York purchased it.

The New York State Office of Parks, Recreation, and Historic Preservation partners with the nonprofit group Bannerman Castle Trust to maintain the castle and the surrounding grounds, and public tours and other events are available from May to October. This is one of the most beautiful abandoned mansions in the United States. Nestled in the Missouri Ozarks, the region known as Ha Ha Tonka was named by the Osage Indians who first inhabited it. The moniker roughly translates to “Land of the Laughing Water” and is thought to be a reference to the sounds made by the abundant waterfalls cascading to the bases of the Ozark cliffs.

Wealthy Kansas City businessman Robert Snyder was transfixed by the area’s natural beauty on a fishing trip in 1903, and he began making plans and acquiring land to build his dream mansion on a 250-foot cliff perched above Big Spring near the town of Camdenton. By 1905, Snyder had acquired about 5,400 acres and hired prominent Kansas City architect to design his 60-room stone mansion, which would cost about $40,000 to build.

Sadly, he would never get to live inside its walls. He was killed in a freak accident in 1906 when a young boy ran out in front of his car and his driver swerved to avoid him; Snyder was ejected from the car—one of the only vehicles in the state at the time—and died at the scene.

Snyder’s oldest son, Robert M. Snyder Jr., took on the task of completing the mansion, which took another decade and a half to achieve. After a series of lawsuits left him bankrupt, the property was operated as a hotel and resort until it was largely destroyed by fire in 1942. The abandoned mansions ruins and about 2,700 acres of surrounding land are now part of Ha Ha Tonka State Park, and its charred and crumbling walls still draw thousands of curious visitors every year. Erected in the early 19th century just north of Glasgow, the castle was the work of nobleman John Lennox Kincaid, and it remained in the family until the 1930s, when it was converted into a psychiatric hospital that would go on to develop a notorious reputation.

With space for 1,200 patients in separate male and female wards, it was the largest and best-equipped hospital in Britain at the time, but conditions in the facility declined rapidly after opening. Plagued by lack of funds, overcrowding and insufficient staff, Lenox Castle Hospital became a haven of neglect, with patients suffering from malnutrition and abuse.

It finally closed in 2002 and has sat empty ever since, with vandals and natural forces taking their toll on its crumbling walls and interior. Some of the area surrounding the castle has been converted into a training facility for the Celtic Football Club, and there has been discussion of renovating the castle into an apartment community, but for now the ruins of the castle are still available to urban explorers interested in abandoned mansions. This massive Gilded Age relic is located on the outskirts of Philadelphia. Built in 1900 for industrial tycoon Peter A.B. Widener, the 110-room Neoclassical Revival mansion is crafted from Indiana limestone and features 55 bedrooms, a ballroom sufficient to host 1,000 guests, a vast art gallery, swimming pool and even its own electrical power plant.

After Widener died in 1915, his eldest son inherited Lynnewood Hall, where he lived until his death in 1943. At that point, no one in the family was willing to take over the maintenance of the massive residence, despite its value of nearly $98 million.

In 1953, Faith Theological Seminary bought the mansion for $192,000 and spent the next half-century slowly selling off the interior décor—including its ornate mantels, fine wood paneling and decorative statues—to raise funds for the organization.

The home went into foreclosure in 2006 and is now owned by the First Korean Church of New York, which has done almost nothing with the property. Various groups have proposed renovation plans, including restoring the mansion to its grandeur as a residence and preserving it as a historic site, but none has yet come to fruition. This Baroque mansion dates back to 1929, when it was built for a wealthy family who abruptly and inexplicably vacated the property in the 1950s. Speculation around the reason for their departure includes several dramatic stories, such as the theory about the family’s maid committing suicide by throwing herself into the residence’s well when her affair with its patriarch was discovered.

The property was taken over by members of the Kuomintang of China (KMT) a few years later, but they too abandoned the place after a significant number of their party also died by suicide, adding to the superstition and gloom surrounding the mansion.

In the decades since it was vacated, nature has largely taken over the structure’s exterior, with thick vines and dense vegetation almost completely obscuring the red brick. The mansion remains a popular destination for curious Taiwanese visitors, but they’re careful not to get too close to the fateful well and the negative energy thought to surround it. The ruins of this unusual geometric treehouse are nestled in a wooded area in the coastal town of Fergene, Italy. Built in the brutalist style by architects Giuseppe Perugini and his wife Uga de Plaisant, the home was built over a period of seven years as an experiment to learn whether the uniquely-designed structure would be a livable space.

Using a modular approach, the family envisioned it as being infinitely expandable, with rooms in various shapes and sizes being added to the primary structure as well as the ground below it. A single red ladder leads from the forest floor to the structure perched in a pine tree.

Since the owners’ deaths, the treehouse has fallen into disrepair and is now covered in graffiti, as many abandoned mansions live their final years. Built in 1876 for zinc magnate Henry C. Hegeler, the Hegeler Carus Mansion was designed by renowned architect William W. Boyington, whose best-known works include the Illinois State Capitol, the Chicago Water Tower and the Joliet State Penitentiary. Its lavish 16,000 square-foot interior included an unusual parquet floor and hand-painted ceilings in many of the 57 rooms.

Hegeler lived in the mansion with his wife and 10 children, one of whom married German writer and scholar Dr. Paul Carus and ultimately inherited the mansion. The last member of the family to occupy the home died in 2004 at the age of 99. Since then, the mansion has been added to the National Register of Historic Places and converted into a museum open to the public. Located in the chic Los Feliz neighborhood of Los Angeles, this posh mansion developed a dark history on a December night in 1959, when its owner committed a gruesome crime. That night, Dr. Harold Perelson bludgeoned his wife to death with a ball-peen hammer and severely beat his oldest daughter before committing suicide by drinking acid. No motive was ever determined, and the surviving children were sent to live with relatives on the east coast.

The 5,000 square-foot Spanish Revival-style mansion sold during probate auction to the Enriquez family, who not only never occupied the home, but also never removed the Perelsons’ belongings, leaving the interior in precisely the same condition as it was the night of the murder-suicide.

The home changed hands in 2016 at another probate auction, and the new owners of the formerly abandoned mansions—prominent civil rights attorney Lisa Bloom and her husband Braden Pollock—gutted the interior and have since put it back on the market. This New Jersey mansion was the scene of another heinous crime; in 1971, homeowner John List murdered his wife, mother and two children in the home, later killing his third child after they had returned home from the boy’s soccer game. He then arranged their bodies in the ballroom under an ornate Tiffany glass skylight, turned on the radio and all the lights, removed his face from a photo of the family and ran.

It took a month for authorities to discover the crime scene, at which point List had already begun a new life under a pseudonym in Denver. He eventually remarried and wasn’t apprehended and charged until 1989. A suspicious fire destroyed the original home in 1974, but its replacement is virtually identical to the site of the savage crime.

Situated at the highest point in Duval County on Fort George Island in Jacksonville, Florida, this Tudor-Revival-style mansion was built for Chicago entrepreneur Nettleton Neff as a winter residence. Sadly, Neff never got to enjoy the unique home, with its distinctive round entry tower and wrought-iron balcony perched above the front door.

In 1926, just before the home was completed, Neff’s wife died in a terrible fire at the family’s summer home in Michigan; two years later, his 21-year-old son committed suicide while a student at Harvard University. Overcome with grief, Neff took his own life in 1931, locking himself in his office at Chicago’s Railway Exchange building and shooting himself in the head with a revolver.

The house was later acquired as a vacation home by Kenneth Merrill, a prominent shipbuilder in the region; he sold it to the wealthy Betz family in 1967, and they were the first residents to occupy the mansion year-round. In 1989, the Florida Park Service bought the property to use as office space and a residence for rangers of State Park rangers.

However, structural issues forced the 2002 removal of the large addition built by the Betz family, and at that point the house was sealed shut, abandoned and left to the elements. The Neff House is one of the most interesting (historically) abandoned mansions on earth, with history including the Betz Sphere and more.

Looking for additional interesting articles on abandoned spots beyond just abandoned mansions? Check out some of these deep dives: