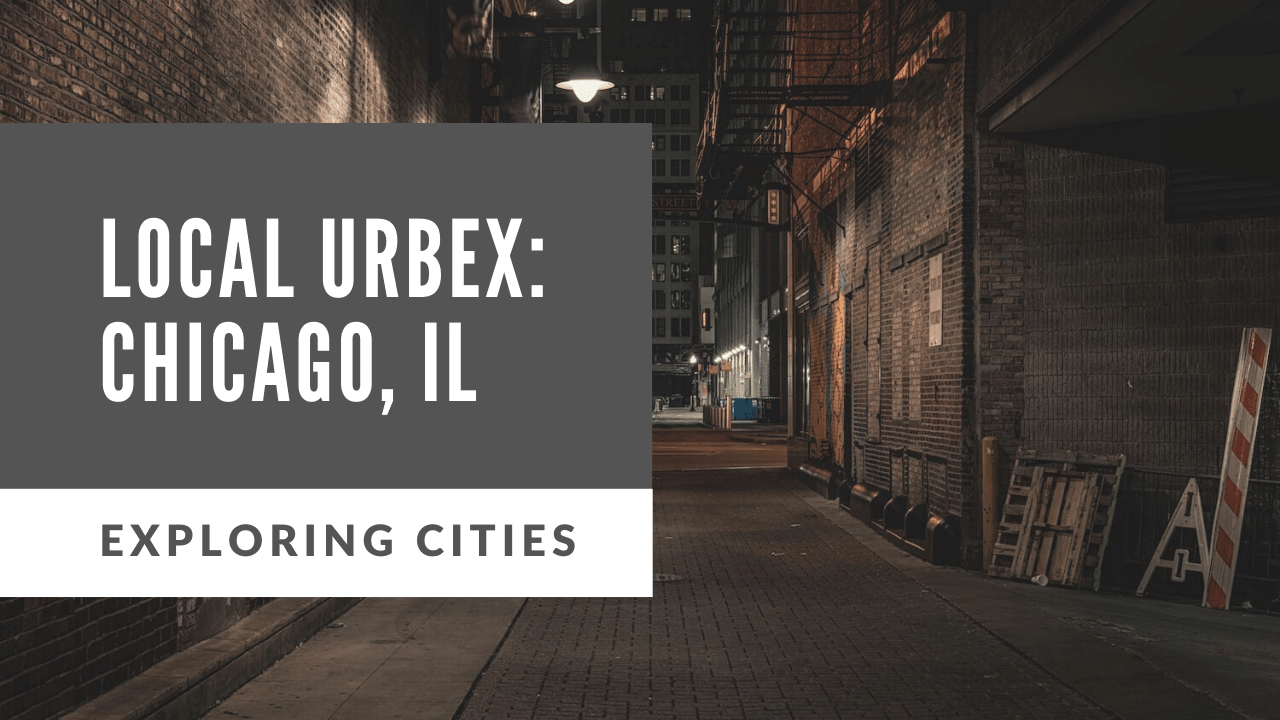 As one of the nation’s largest cities and the crown jewel of the Industrial Midwest, Chicago is packed with abandoned places just begging to be explored by local and visiting urbex enthusiasts. Much like Detroit and Jacksonville, Chicago has the grit and grunge necessary for a perfect blend of urban exploration locations.

From crumbling churches and vacant warehouses to shuttered hospitals and hollowed-out factories, the list below offers 10 of the most interesting abandoned places in Chicago and the surrounding area.

Note: All of the below places, unless otherwise noted, can be explored as of mid 2020. However, it should be noted that all properties here, and many other abandoned places in Chicago, Illinois, are private property, and exploring would be considered trespassing.

While there are some that are relatively unwatched, there are others under strict supervision around the clock. Do your due diligence, be smart, and read our resource Caught Trespassing? Staying Out Of Trouble Urbexing in 2020. Though the building dates back to 1903, the St. Boniface congregation was established in Chicago by German immigrants at the end of the Civil War. Designed by famed architect Henry J. Schlacks, this once-breathtaking 218-foot tall Romanesque Revival has been slowly deteriorating since the Archdiocese of Chicago shuttered it in 1990.

The harsh Chicago winters and the activities of vandals have taken their toll on the building’s structure, with even the beams holding it all together showing signs of weakness. Yet even in its disintegrated state, St. Boniface still retains fragments of the soaring beauty that once defined it, and somehow the altar itself has managed to survive the years virtually unscathed, even as the walls, floors and roof around it continue to crumble.

Multiple attempts to preserve or redevelop the site have occurred over the last several decades, but to date, none have come to fruition. Citizen activists managed to halt the archdiocese’s planned demolition of the building in 1999, and the Coptic Orthodox Church had plans to purchase the building in the mid-2000s, but their proposal was ultimately rejected by the archdiocese.

In March 2009, the city itself put a stop to the church’s second demolition effort, citing a desire to find a group willing to preserve the historic structure.

In 2016, the property was purchased through a joint venture between the Chicago Academy of Music and Stas Development, with plans to renovate the original church building into condominiums and build a new music school on the site, but no work has yet begun on the proposal, leaving the haunting old church open to urban explorers—for now.

Update: As far as abandoned places in Chicago go, this place is currently going through quite the revival. The condo complex has been built and is about to open. Built in 1929 to ease overcrowding at state mental hospitals in Elgin, Jacksonville and Kankakee, Manteno State Hospital featured 40 cottages named for pioneers in the mental health field, including Adler, Freud, Nightingale and Zeller.

The facility’s population hovered around 1,000 until the 1940s, when it surged to more than 8,000 treating both mental health issues and physical ailments like typhoid and tuberculosis. During this time, the hospital developed a notorious reputation for brutal human experiments, with almost 500 patients losing their lives in 1941 alone.

By the 1970s, elderly patients and alcoholics accounted for most of the facility’s census, and in 1983, Manteno was targeted for conversion into a veterans’ hospital. Most of the cottages were demolished in the early 2000s, with a few renovated for other uses. The administration building was refurbished and occupied by HomeStar Bank, which opted to preserve much of its original architecture.

The last crumbling building to remain standing was Morgan Cottage, which soon became a favorite destination of local urban explorers, who trekked to the site to witness the eerie evidence of tortured souls and alleged paranormal activity inside. For a long time, it has been one of the most visited abandoned places in Chicago. The Morgan Cottage was demolished in 2015. Completed in 1925, this massive building features a blend of Romanesque Revival, Art Deco and Spanish architecture and previously housed the merged congregations of the First Hungarian and North Shore synagogues. The lavishly decorated space included a two-story stained glass arch, an ornate ark for the Torah and a sanctuary that seated upwards of 2,000 congregants, as well as classrooms, kitchens, office suites and multipurpose space.

The building closed in 2008 due to a combination of factors, including declining membership, insufficient funds and squabbles over alleged financial misappropriation by the rabbi.

The infighting continued over the fate of the building, which culminated in its sale by the rabbi’s son in 2016 despite efforts by the congregation to nullify the transaction. Though the façade, foyer and grand staircase were preserved and the ark and stained-glass arch donated to other synagogues in the region, the rest of the building was repurposed as the luxury apartment complex dubbed “The Synagogue,” which accepted its first tenants in 2019.

Though most of the original structure is gone, its footprint lives on in the photos captured and shared online by urban explorers who managed to get inside before it was dismantled. It truly was one of the most beautiful abandoned places in Chicago. First opened as the Tenth Church of Christ, Scientist in 1917, this awe-inspiring building was acquired by a small African-American congregation in the 1960s, which occupied it for the next 30 years. Since then, the church has been the subject of multiple legal battles between various developers, citizen groups, financiers and even the city itself.

Though planned for redevelopment as a residential community, no action has yet been taken to either demolish or rehab the existing structure. In shared online photos, urban explorers have captured its dramatic arches, stately columns and intricately-decorated domed ceilings, which stand in contrast to the graffiti, trash and chunks of plaster and concrete that litter the walls and floors, making it one of the most tragic yet hauntingly beautiful abandoned places in Chicago. This unexpectedly ornate prison dates back to 1858, nearly as old as the city of Joliet itself. Since it closed in 2002, its distinctive Gothic architecture and locally-quarried limestone have made it a popular location for filmmakers, appearing in acclaimed shows like “Prison Break” and “Empire” as well as a handful of feature films.

Despite its visibility among Hollywood executives, the facility continued to deteriorate due to natural causes as well as vandalism and arson. In 2017, the City of Joliet and the Joliet Area Historical Museum partnered with community groups and volunteers to preserve the site as a historical landmark open for public tours and special events. These 15-story silos were once the backbone of Chicago’s grain-processing industry, but after an explosion in 1977 left them damaged beyond repair, the property was abandoned. Since then, the silos and corresponding underground tunnels have become a popular target for vandals, performance artists, urban explorers and adrenaline-seekers attempting to climb to the top of the towers.

They also enjoyed a brief brush with fame in 2014, when several of the structures were demolished as part of the filming of “Transformers: Age of Extinction.” After achieving massive wealth in the industrial boom of the late 19th century, railroad executive George Pullman poured his prosperity into one of the country’s first planned communities, a Victorian town named for his company and envisioned as a place where his employees could both live and work.

In 2015, President Obama designated the remaining structures as a National Monument, with plans in the works to restore and renovate the site as a National Park and Visitor Center. Established in the mid-1920s at the economic peak of the Industrial Midwest, the United Methodist Church in Gary, Indiana was bankrolled primarily by U.S. Steel, the city’s largest employer. The company donated both the property for the church as well as about half of construction costs, which totaled about $800,000—no small sum at the time.

In addition to a large sanctuary, the nine-story development included a 1,000-seat auditorium, gymnasium, dining hall and classrooms, although the planned bowling alley was never completed. In the 1950s, the 3,000-member church was the largest Methodist Church in the Midwest, but its membership declined along with the population of Gary in the decades that followed.

The church closed its doors for good in 1975 and has since avoided both redevelopment and demolition, making it a popular destination for urban explorers and other illicit uses. All in all, it’s one of the most interesting abandoned places in Chicago. Also located in Gary, the Palace Theater opened in 1925 as the thriving industrial town added new entertainment venues for employees of U.S. Steel and their families. Young & Wolf Enterprises, one of the most successful businesses at the time, built more than a half-dozen theaters and playhouses in the area, but the Palace Theater was their crown jewel.

As the steel industry shrank in the 1960s, so did the town of Gary, and the theaters became magnets for crime instead of wholesome family entertainment. After multiple violent incidents at the Palace, including the stabbing death of a high school student in the lobby and an attack on a woman in the restroom, the theater was shut down in 1972.

After several reincarnations in the decades that followed, the theater has since been primarily a haven for graffiti artists and urban explorers, as well as looters who scavenged the building’s copper fixtures, decorative accents and all other items of value.

The city hoped to demolish it in 2004, but it ultimately survived the wrecking ball due to lack of available funds to raze it. Subsequent plans for redevelopment have also gone nowhere. As seen by the photo above, it is one of the most beautiful abandoned places in Chicago. This once-stately church was previously a sanctuary for the hardworking blue-collar German and Irish immigrants who populated the Pilsen neighborhood in the late 19th century. Its hallmarks included a 90-foot bell tower, tall wooden doors, sturdy local masonry and Gothic accents.

As its mostly German congregants drifted away from the neighborhood in the 1940s and 1950s, the building was likewise abandoned in 1956, leaving it to the ravages of time and nature. A massive fire devoured the roof and much of the interior in 1979, and a powerful windstorm brought down most of its walls two decades later.

At the time, private owner John Podmajersky Jr. planned to raze the site and redevelop the property for other uses, but after being contacted by the descendants of the church’s founding members, he decided to preserve the building and its rich local heritage for future generations.

Since then, much of the building has been restored, with a skylight crowning the bell tower and a peaceful garden occupying the former sanctuary. Still, relics from the church’s fraught past—including a charred crucifix that survived the devastating fire—remain on display as a testimony to visitors.

As a major U.S. city that has experienced the extreme economic swings of the past two centuries, Chicago is packed with both modern developments and abandoned historic sites that have been ravaged by time and human activity.

These 10 locations are just a few of the most interesting destinations for urban explorers in the Chicagoland area; a stroll through most neighborhoods in the urban core will likely yield dozens of fascinating—albeit slightly more obscure—abandoned places in Chicago just waiting to be discovered by curious and ambitious urbex enthusiasts.

Feel free to share your most memorable abandoned places in Chicago in the comments below.