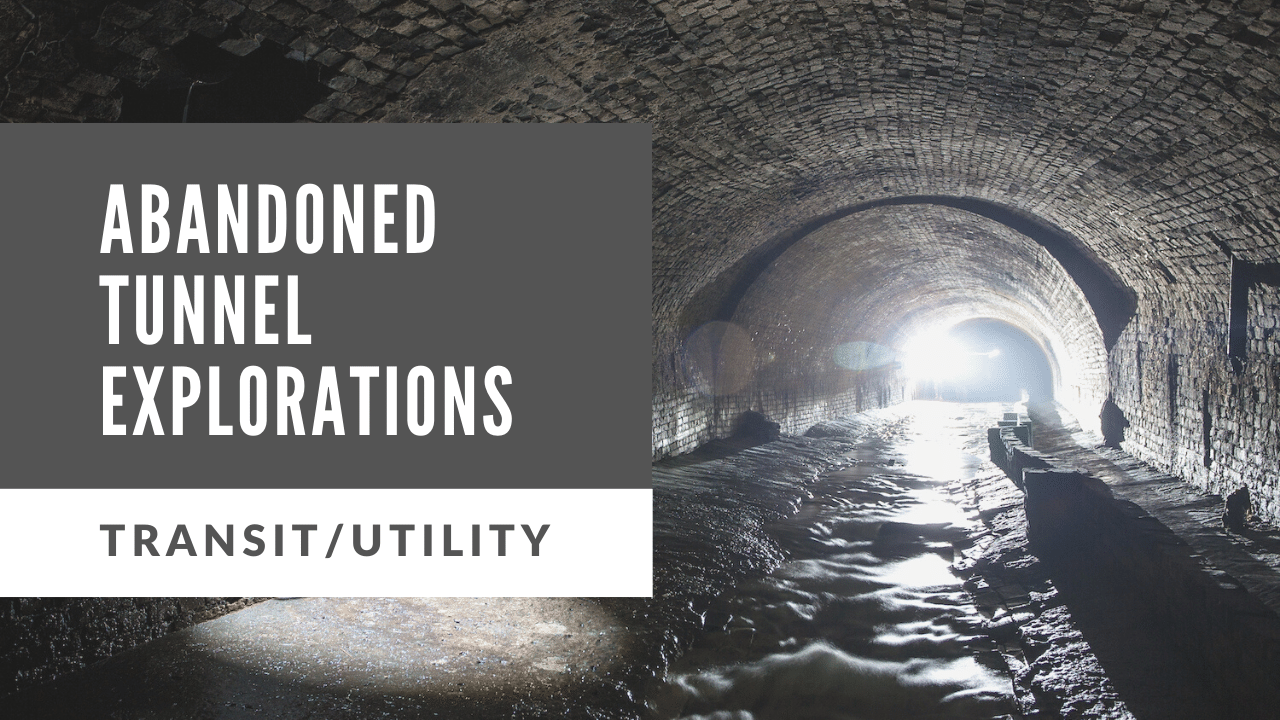 Ingrained deep into many of us is an internal drive to explore our surroundings. This built-in curiosity makes it hard not to seek out new types of adventures. There are many facets to urbexing and exploring abandoned tunnels happens to be an exciting one with its own set of appeals, benefits, and dangers. From the planning stages of the mission through executing and completing the adventure, the thrill of abandoned tunnel explorations is hard to beat.

Urban exploring is often about finding the places that are typically off limits or the parts of civilization that have been unseen for a long time. It can become an addictive feeling – knowing you are the only one to see such an uncommon sight. When making your way down an abandoned tunnel, you know people are sleeping in the city above, but you are part of a secret hidden from so many.

Types of Tunnels: What qualifies it as a utility or transit tunnel? Why Are Abandoned Tunnels A Thing?

The existence of tunnels has greatly impacted the history and current success of modern civilizations. There are of course different types of tunnels for various purposes, but the earliest tunnels were designed for assisting in the transportation of water in and waste out of villages. As demands of an advancing civilization increase, so do the needs for tunnels.

After more time the utility of tunnels became better, but the amount of time they were used was even more desperate. It turns out that tunnels are a maintenance nightmare for drainage, collapse, etc. As new ones are built, many are abandoned which opens up a secret underground system that some may find irresistible to their adventurous nature.

A common type of tunnel is a public work tunnel to carry water, sewage or gas lines across far distances. Such utility tunnels are often called steam tunnels but can also carry water supply, sewage or even communications utilities like fiber optics or cable for television and telephones. Other service tunnels are designed for infrequent access for maintenance or installation purposes. Universities, hospitals and other large institutions are known for having utility tunnel systems.

Transit tunnels are another main type and they are used for underground transportation for trains, subways, and roads. The concept started out as underground canals for water travel, shipping or irrigation and are now used for modern railways and roads when required to pass through water or rock to be more efficient than finding a way around, such as mountains and large rivers.

Transportation has always been about following the path of least resistance so the convenience of travel has to exceed the effort of construction and upkeep of the tunnel so sometimes it was absolutely necessary to replace an existing railroad or complete a tunnel for its path. Railroads rarely took on more than a 3% grade so depending on the topography or material, it was necessary to abandon the construction.

Eventually the highway system took over and the hauling of freight shifted from trains to trucks. Tunneling for highways presented its own set of problems leading to abandonment of tunnels, such as brake shoes on trucks would seize up as trucks were going down hill.

Exploring abandoned tunnels can be considered a reality hack, a needed escape from the daily routine. For some it is a lifestyle, for others a hobby, or sometimes it is just a one time venture. Regardless of the purpose, many say it’s hard not to want to go back for more once you experience the mystery and history of what’s hidden below the surface. There are many explorers who specifically seek out these forbidden underground zones. Aside from urbexers, abandoned tunnels attract graffiti and street artists and those who come to view their work, homeless, photographers, and bored thrill seekers.

Exploring a place that has gone untouched for so long can feel like traveling back in time. Gaining a glimpse into history is a common draw to exploring abandoned tunnels. A lot can be appreciated about the dangers endured and the efforts put forth for its construction. The appeal of going through a mountain or underground becomes so much more interesting when the act of desperation to build the tunnel is realized.

Many tunnel enthusiasts express that exploration of this kind supports a love for their city with a desire to discover and appreciate all its nooks and crannies. Knowing you are one of a select few who get to experience the tunnel can emphasize your sense of integration to your environment and feel a bit more connected to where you live. Something about being in a place that’s not supposed to be touched can be empowering and is easy to enjoy becoming a part of an exclusive community as the underground is certainly not for everyone.

Within the past decade there has been a large influx of Instabloggers and YouTubers constantly on the search for more content and new places to explore. Exploring abandoned tunnels is rapidly becoming a widely popular activity to document on varying social media platforms all over the world. Many participants have a concept of becoming a part of history themselves through their documentation, while others are just seeking something more extreme to post to gain views.

You might only be seeking fun or fame but could end up with some criminal charges instead. Trespassing is a serious offense so enter only if you dare… Many enticing places such as abandoned tunnels are often illegal to explore, and although it can seem drastic or unfair, it is likely they are prohibited in response to potential dangers.

This type of adventure is no joke and you may find yourself in some extreme conditions. No matter how careful you intend to be, there is always the possibility for injury. Dark and dingy tunnels are not convenient places to seek medical attention, especially if trespassing and attempting not to draw any attention to your presence there. Toxic gases, fumes, or lack of oxygen can be concerns as well.

Some climates inside a tunnel are perfect conditions for thriving. Rats and other critters may be present, so you need to be aware of such possibilities for safety precautions as well as to avoid unnecessary startling to yourself. Contaminants and certain bacteria that string together and can be found hanging are common enough to be nicknamed by explorers as snotsicles. Encountering other humans is a possibility too.

In large cities such as LA and NYC there are groups of people who have taken residence in the underground systems who may have defensive tenancies, although these occurrences have decreased over the past couple decades.

Abandoned tunnels can be very expansive systems. It can be easy to get lost and likely that your cell phone signal will not work for conveniently pinpointing your location on GPS. You will have to rely on other resources like maps, instincts and common sense and hard to prepare for what you cannot predict.

The Art of Finding Abandoned Tunnels

There is often much more beneath the streets than most realize but figuring out how to get down there can be a challenge. Some locations are hidden in plain sight, but that does not mean access is risk free. Location and access can often pose a problem, as some abandoned transit loops require access through an active one which can be an act of death depending on the tunnel.

Elevator shafts and manholes often serve as entrances for utility tunnels whereas transportation tunnels may have a larger or open face entrance. Many abandoned tunnels are closed off to prevent such exploration so some research and preparation may be necessary. Having any historical maps of the tunnel system to cross reference with current topography and what is currently above the surface is helpful but those are not always easy to track down.

Familiarize yourself with the area prior to visiting by using Google Street view. Forums are always a good resource if anyone has documented their experience there. They may have helpful hints and bring awareness to some unexpected things you can prepare for ahead of time.

It is hard to be prepared for each of the various conditions you might come across when exploring an abandoned tunnel but there are a few considerations that are likely to come in handy on any abandoned tunnel adventure. Conditions inside a tunnel may be small and cramped, cold and dark, damp or even muddy. Access may be tricky through tight openings like manholes requiring force to open. Even the most well thought out plans cannot predict the circumstances you may encounter, but there are certainly ways to help ensure your comfort and safety on a adventure like this.

Let someone know where you are

You do not want to rely on technology working to contact the ground dwellers above, so make sure there is someone up there who will not be joining you and aware of where you are. Set up a time to check in so if something does happen, you know there is someone looking out. Then, be respectful of that time frame as you explore to make sure you do not exceed your limit and cause unnecessary worry or rescue attempt.

As such it is also recommended to never explore abandoned tunnels alone.

Exploring abandoned tunnels is often illegal, so you must use caution and do proper research ahead of time. Conduct a threat assessment including potential construction in the area or who else you may encounter. Depending where you are, sections of infrastructure could be unstable since nobody is doing maintenance in places like this. You will want to know your point of access and have an exit strategy with any alternative pathways noted in case some are blocked.

Other pathways inside may be sealed too so know multiple routes to get around. Some access points may be blocked and boarded, guarded, or just overgrown. Obtain any maps such as subway maps, topography maps, construction blueprints, etc and have an understanding of the infrastructure. look at google maps satellite view and cross reference with photos and real life views once you’re there to get in.

Enjoy the spontaneity and thrill of the unexpected happenings along the way by knowing you have the proper gear and equipment. Common gear includes a hard hat for low or falling objects, protective clothing to cover full body, and dark clothes for better disguise. Equipment that will be helpful are flashlights and headlamps.

Sound can really echo so earplugs can by handy, and with how light and small they are there is no excuse for them to not find a way into your pack. Other items are not as convenient to carry but may be worth the effort, such as crowbars for access points or a collapsed section of tunnel.

No matter what your personal reason for the adventure is or the type of abandoned tunnel system you choose to explore, you will appreciate the chance to enjoy adventuring where many never get to see or even know exists. You will be exposed to a whole new section of the world forever changing your perception of your city. However, with all good fun comes responsibility so be sure to follow the urbex code of conduct and respect the environment and fellow adventurers.