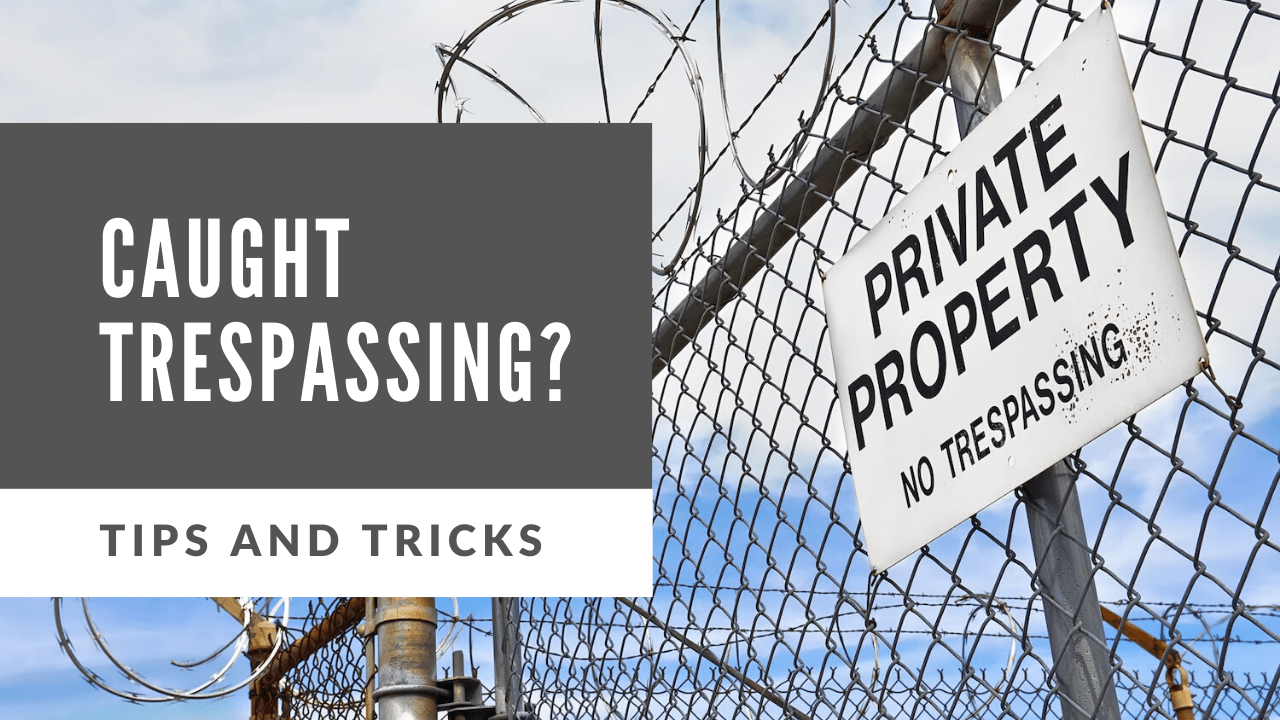 Congratulations on picking up a hobby that is not only marginally hazardous to your health, but legally dubious at best. That’s right, the wonderful world of urban exploration is more than likely going to get you into a confrontation now and again with landowners, private security, or the local police.

Urban exploring takes us into abandoned buildings and forgotten places, but this property is still owned and often protected by someone and when (not IF, but WHEN) you are discovered, you can rationalize it all you want. However, the bare truth at the end of the argument is that you are caught trespassing, and trespassing is illegal. Sneaking About: An Urbex Game

Pleading ignorance won’t get you anywhere, we all understand that part of the thrill of urban exploration is the sneaking around, clandestine entry, and silent exploration. We’re sneaking around hoping not to get caught so it’s plain as day that when we do get caught, we knew what we were in for.

Throwing ourselves on the mercy of those that catch us is not the only way to stay out of trouble. We’ve got a few tips that may help you keep your composure and possibly sway the balance in your favor when you’re called out for urbex activity.

You Will Likely Eventually Get Caught Trespassing

Getting caught is going to happen, so do your preparations ahead of time, know your risks and take your chances accordingly. Some people would love to get more involved in urbex but their day job and livelihood depends on a clean police record.

Now, we’re only trespassing, but that is often enough to keep some hesitant to delve deep into the unexplored. Local laws and regulations vary from state to state, city to city and even among local municipalities. Simple trespass is getting caught where you don’t belong and the penalties are often minimal.

Criminal trespass is getting caught once you have been advised you are trespassing. The penalties for criminal trespass are more substantial and can include jailtime, so once you’re caught don’t press your luck. Walk away to explore another day.

Implications of Trespassing on Private Property

The implications of getting caught on a simple trespass can change depending on who it is that catches you and their mood. They have every right to press charges but if you respond cordially and respectfully, and don’t happen to catch someone in a bad mood, the odds are you’ll be told to move along and stay out from now on. Follow this advice and count yourself lucky if this is the case. One surefire way of making sure you’re never caught trespassing while urbex it to ask for permission. Many land owners are a matter of public record and if you contact them and present yourself as a photographer or documentarian (which technically, you are…) some properties will be glad to allow you provisional access in response to your smooth talk.

Some will turn you down, often for liability sake, and once you receive an official “no”, trespassing onto the property anyway can result in a harsher fine under the criminal trespass regulations. Some urbex believe it is easier to ask for forgiveness rather than for permission.

Official guided tours are another way to keep out of trouble. You can look up guided tours in the urbex forums and find plenty of great locations, some of them legendary, that provide special access to groups led by a guide. The fees for this activity are often set aside by the property owners to clean up and protect the aging sites.

Tips and Tricks To Avoid Being Caught Trespassing

Official tours and permission granted access locations are a rarity though. For most of the urbex activities we engage in, we will be breaking the law and trespassing. When you are caught, these simple tips will give you the best possible chances of talking yourself out of trouble or at the very least, minimizing any punishments and fines. Be Prepared for the Worst

Your backpack full of gear is a calling card to anyone who catches you. No they do not have the right to see what’s in your pack, but if you offer to show them what you are carrying, they’ll see you have nothing to hide and you’re not stealing any of their property.

They’ll also see you have a backpack, gloves, eye protection, breathing respirators, a first aid kit, and any other urbex gear that shows you’re not a vandal, but a responsible explorer. This may help sway them in your favor.

Focus on the Camera

No landowner wants a good-for-nothing trespasser lingering in the dark shadows of their property. But they just might be interested in hearing about how their property attracted your camera lens to capture some fantastic images.

Again, they can not demand you show, delete, or hand over your images, but if they seem open to it, displaying any images you have already captured may impress them. Loitering gets you kicked out, artistic expression may get you excused.

Looking for the best DSLR for your photo-taking urbex adventures? Check out our guide.

Remain Respectful of your Environment

Remember you are the one in the wrong here. It’s nice to get caught by the landowner who scoots you off the property without a harsh word, but you can also run into a private security guard who had a boring shift and has something to prove. Yes, it is best to put up with his bravado.

Smile, be pleasant, remain calm and respectful. Arguing and getting belligerent can only buy you more trouble. Whether it’s the cops, private security, or the land-owner, the only way to increase the probability of you staying out of trouble is to remain respectful.

Once you go around breaking stuff, you’re done. Anyone catching a trespasser automatically assumes you’re there for nefarious reasons. Vandalism, destruction, or worse. If they are proven correct, any chance of you getting off light is as broken as that window you just smashed.

Exploration and photography are misunderstood and elusive hobbies that many people don’t understand. You’ll have to explain yourself to whomever catches you. But your argument is invalid and counterproductive if you were caught because you were smashing everything in sight. Remember, leave no trace. Take only photos, leave only footprints. Our Final Thoughts To Avoid Being Caught Trespassing

Once you engage in the thrills of urbex, it is only a matter of time before you are confronted as a trespasser. This is when your charisma and personality skills will come into play. Judge the situation and see if the person is open to explanation and conversation.

If so, be courteous, respectful, and always remain aware that you are in the weaker position. Stay cool and do your best to show them that you were not here to cause harm but to capture beauty. It’s a coin-toss, but following these few tips gives you better odds of staying out of trouble if caught trespassing.