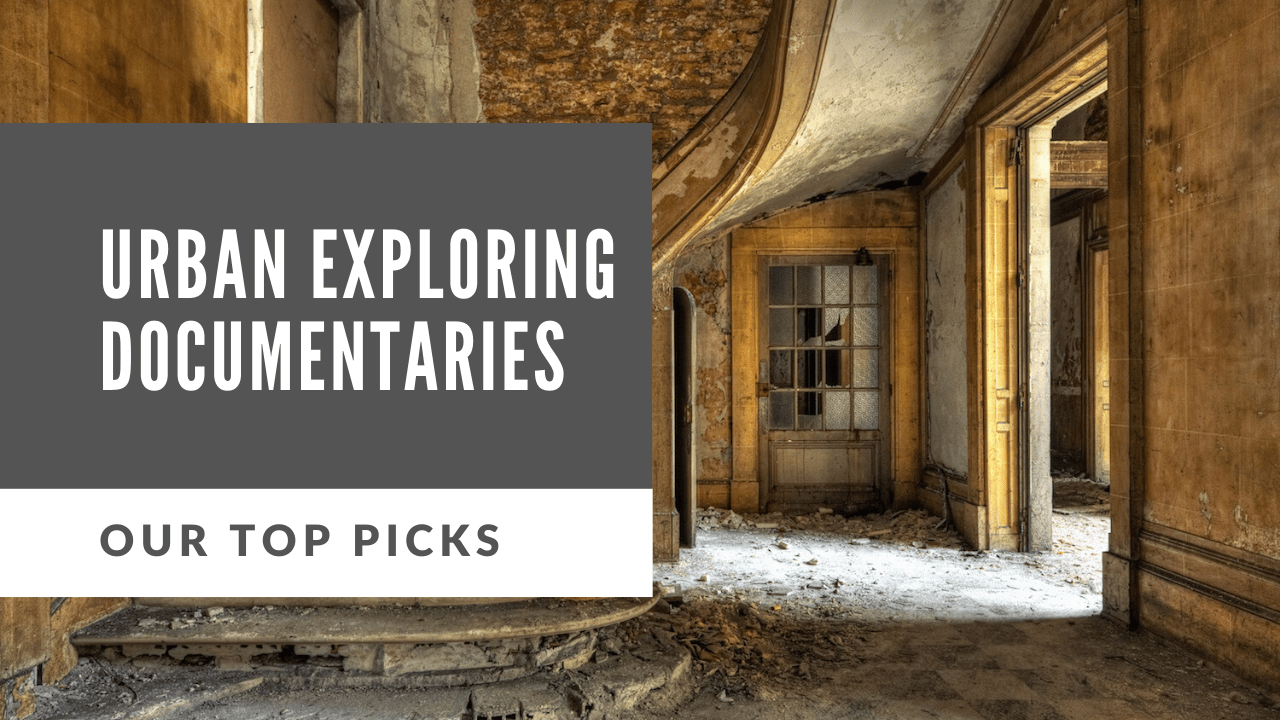 Whether you’re just dipping a toe into the world of urban exploration or you’ve been fully immersed in it for years, watching documentaries about this increasingly popular pastime can be an excellent source of information and inspiration.

While urban explorers are notoriously tight-lipped about their hobby, there are a handful of fascinating short films that provide an up-close glimpse into the adventures and challenges of the pursuit.

Urban Explorers: Into the Darkness (2007)

One of the earliest urban exploration documentaries produced about the secretive underworld of urban exploration, Urban Explorers: Into the Darkness accompanies urban explorers in various locations across the globe as they trek through abandoned tourist sites, historic mental asylums, underground sewer systems, government buildings and even the catacombs of Paris.

Through a blend of action footage and probing interviews, filmmaker Melody Gilbert attempts to reveal the motivations and passions of the explorers she covers, providing the viewer with a better understanding of why these hobbyists choose to risk injury and arrest to visit these forgotten and underappreciated structures.

This fascinating film was born of a partnership between documentary filmmaker Andrew Wonder and historian and urban explorer Steve Duncan. Together, they capture a rare look at the hidden universe that exists beneath the bustling streets of New York City.

In Undercity, the pair goes underground into the labyrinthine subway system, taking the viewer on a shadowy adventure into places that are off-limits to all but the most daring among us. Risking injury and even death at the hands of the electrified rails, Wonder and Duncan interview the few surviving “Mole People” who make the New York underground their permanent residence.

They also scale the Williamsburg Bridge to provide a contrasting bird’s-eye view of the city, leaving the viewer with a fresh perspective on the otherwise familiar metropolis.

Produced by Bradley L. Garrett as part of his postgraduate studies at the University of London, Urban Explorers: Quest for Myth, Mystery, and Meaning takes a decidedly scholarly view of the renegades pursuing urban exploration around the world.

While the film does examine the superficial motivations of urban explorers, it also dives deeper into the psychological and cultural influences on the rise of urbex in recent decades. Garrett considers weighty topics such as psychogeography, materiality, surveillance and rediscovery of play and raises intriguing questions about the strange draw of these hidden, sometimes-seedy locations in an otherwise orderly and predictable urban setting.

In Urbex – A Documentary, dark fantasy author turned filmmaker Chris Sendrowski seeks redemption and meaning in abandoned warehouses and concealed tunnels across the country. Filmed over five years, Urbex follows Sendrowski’s quest to find meaning in the ruins of American prosperity and relief from his own personal struggles.

He interviews fellow urban explorers along the way, revealing the artistic and cultural significance of the underground community and linking their pursuits to famous explorers across human history.

Perhaps the most poignant moment in the hour-long film comes when Sendrowski summarizes the profound impact urban exploration has had on his own mental health, musing, “Who would have thought that stepping into an abandoned building and exploring the tunnels and the darkness would have been more therapeutic than years and years and thousands of dollars of therapy?”

In this documentary, filmmakers David de Rueda and Melanie de Groot capture the universal human passion for adventure and discovery embodied by urban explorers across America. Together, they follow explorers from a variety of backgrounds as they visit the ruins of modern life, from dilapidated warehouses in Detroit to dormant missile silos in Denver.

Many of the structures featured in the film no longer exist, adding historical significance to the entertainment and educational value of this fascinating piece.

Modus Operandi – Urbex reveals the underground world of urban exploration in the Land Down Under. Shot by Adrian Ortega in Melbourne, Australia, the film features the perspectives of four urban explorers in the city and their individual motivations for pursuing the hobby.

This compelling 33-minute short film juxtaposes dizzying footage from explorers’ summits of structures hundreds of feet above the city streets with shadowy shots from the underground tunnels of its infrastructure.

In addition to being visually arresting, the film also raises important points for discussion as Ortega considers the impacts of this rapidly-growing subculture on the broader community.

No Trespassing: The Art of Urban Exploration (2016)

This well-crafted documentary about urban exploration in Florida is the brainchild of filmmaker and Miami native Denise De La Vega, whose award-winning work has been featured on NPR and CNN en Español. Originally shot in 2014, the film was rereleased in 2016 with additional footage and aired on the first season of the PBS Filmmaker series.

In addition to video clips and interviews, No Trespassing incorporates hauntingly beautiful still images from two of Florida’s most prolific urban explorers, Abandoned Muse and Nomeus.

This short film zeroes in on the relationship between urban exploration and social media as well as explorers’ impact on the locations they visit. Featuring interesting camera angles and thought-provoking interviews with urbex enthusiasts, the video packs a ton of worthwhile content into less than 10 minutes of footage.

All of these documentaries go in-depth and do a great job of explaining the reasoning and thought process on why we enjoy urban exploring.

In addition to these more structured urban exploration documentaries, YouTube offers a wealth of amateur videos that can provide additional insight into the thrilling yet complicated world of urbex.

While nearly all of these pieces open with a disclaimer that essentially warns the viewer “don’t try this at home,” the lure of these largely forgotten locations is undeniable. Once you start watching, you may well find yourself wanting more urban exploration documentaries.