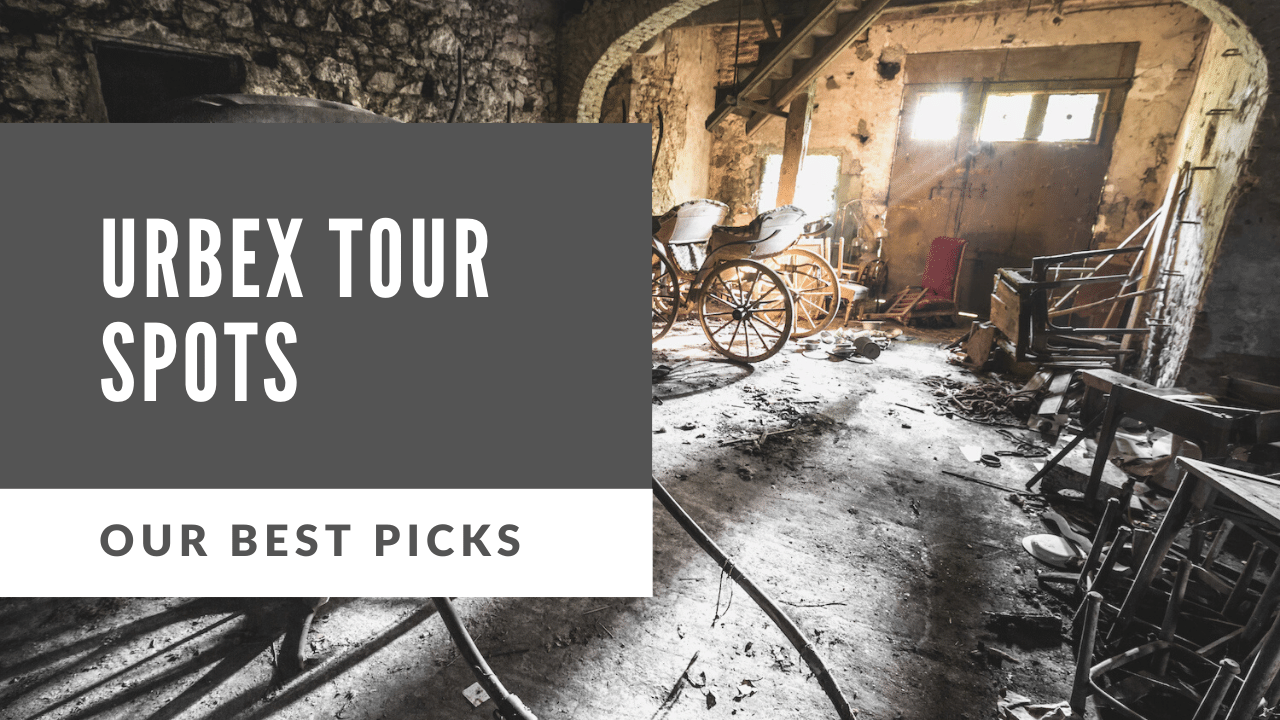 When you think of urban exploration, you likely think of solitary excursions or small bands of rogues skulking around in the shadows. Most of us conduct our urbex activities in private like this, but there is an alternative.

The guided tour is a welcome change to some of our clandestine investigations and though some may feel it is missing out on the excitement of the secretive explorations, you may get more out of a guided tour than you think. For instance, direct access to urbex locations that would otherwise be inaccessible.

Looking for more exploration guides? Check out Exploring 10 Amazing Abandoned Amusement Parks in The U.S. and The Best Urban Exploration Locations In The US: Top 7 Cities.

Perfectly legal and completely safe tours allow you to take in the history of urbex locations and possibly see some of the points that you might have missed. If you’re interested in abandoned locations for more than sneaking around undercover, then a guided tour may be an excellent diversion for you. This is an authentic tourist spot and one of the most popular urbex locations in the world. So the idea of it being a great urbex location may take some getting used to, but if you remember that it’s all about seeing the back side of the world, the hidden and obscured, this may be one of the ultimate urbex locations.

Millions of bodies intricately stacked in an underground cave, what’s not to like about seeing this spot? The guided tour will take you through the famous catacombs, show you the exceptional and disturbing ossuary, and explain the history of the Parisian oddity, while you get to marvel at one of the world’s most intriguing burial sites.

It may be possible to gain un-escorted access to the catacombs, you run unnecessary risks examining this urbex location without a guide. It is trespassing on museum grounds, any troublesome vandalism will be attributed to you, and the labyrinth is rather large and complex, you may get lost.

Another private property site that is a fantastic urbex location is the Waverly Hills Sanatorium in Louisville, Kentucky. No longer an abandoned facility, this old hospital is undergoing constant restoration to keep it intact without ruining its historic nature. And it has become an immensely popular urbex location among tourists far and wide.

Attempting an unsanctioned exploration would be ill advised simply because it has become so popular. Security and observation has been stepped up and you will be found. However, don’t let its notoriety keep you from checking it out. Guided tours of this famous spot are well worth the time.

A menu of tours are available including the short 2-hour, the extended 6-hour, a private overnight experience, and every year they host a haunted house around the Halloween season as well as a holiday light show surrounding Christmas. This old hospital has become popular among urbex and ghost hunters alike and the guided tour fees go toward keeping the site open and safely explored. Alcatraz Island is most famous for people escaping from the island, not for sneaking onto the island. While we agree that this would be an intense urbex location to explore alone and unfettered by a guided tour, this property is secured and maintained by the National Park Service, a federal organization and we don’t see how anything other than the guided tour could be recommended.

Once you ferry the mile and a half trip to the island, you can explore the grounds at your own pace and see many of the facilities on your own. The lighthouse, water tower, main cell-block, and other buildings are free to wander. There is a tram with a guided historical description of the sites.

But to make Alcatraz Island a truly exceptional urbex location, spring for the “behind the scenes” guided tour. You will get to see some of the seedy underbelly of the old prison. The tour brings you through various routes that may include buildings that haven’t been shown in some time, so you are getting a fun look at some of the urbex locations that are off the beaten path. Hashima Island is one of those perfect and ultimate urbex locations that we all hope to find. This one is a 16 acre island nine miles off the coast of southern Japan. Consisting of a rich coal mine and the infrastructure built to house the miners, the island also has the dark history of using slave labor to mine the coal.

What makes Hashima so beautiful to explorers and a perfect urbex location is that it was abruptly abandoned, remained abandoned for decades, and is now offering guided tours. The Japanese shift from coal to oil made the island obsolete and the island closed in 1974. It wasn’t touched until the early 2000’s allowing thirty years of natural decay to take its course.

Crumbling buildings, overgrown vegetation, storm damage, and erosion has turned this small city into a ghost town, untouched by humans. Modern tours take you through the city on a safe trek exploring dilapidated ruins and avoiding the unsafe structures waiting to collapse on top of you. We can most likely thank the recent television miniseries for making this ghost town a popular urbex location. Intrepid explorers have been venturing into the Chernobyl Alienation Zone for years but the latest round of attention has cultivated a sense of intrigue, stepped up security, and plenty of guided tour opportunities.

Visitor safety is closely monitored and the local government regulates the touring companies with permits and inspections. As long as you are exploring Chernobyl’s Exclusion Zone, you are receiving less radiation than you did on the airplane ride to get there.

Tours will take you through checkpoints and through the Chernobyl sites you saw on the movie, but the true urbex location to witness is the abandoned city of Pripyat. You won’t be allowed to wander through the buildings themselves, but you will see the hospital, schools, swimming pools and other abandoned spots in the lost town. Chief among the notorious spots is the rusted wreckage of the amusement park, abandoned and untouched since the 1986 disaster. Nuclear reactor disasters have become a popular tourism destination. And while that may appear macabre to many, this natural appeal to our darker senses is one of the reasons we began exploring abandoned places to begin with. The Fukushima Daiichi reactor itself does not offer much to safely be explored, but the surrounding exclusion zone serves as a great urbex location to tour.

Reserved for those with a sense of empathy for the fresh wounds on the culture of Japan, taking a guided tour into the coastal areas of the Fukushima Daiichi exclusion zone will fill you with a real sense of dread and danger as you will witness first hand the devastating power of the tsunami and earthquake’s destruction.

The surrounding countryside is filled with abandoned villages and small towns. Evacuations and radiation dangers left entire neighborhoods empty and left behind. The sadness of the disaster is countered by the hope of the displaced citizens and our eagerness to learn about this disaster and to learn from it to prevent another like it.